INNER BEAUTY IS… WITH HOLLY DAVIS 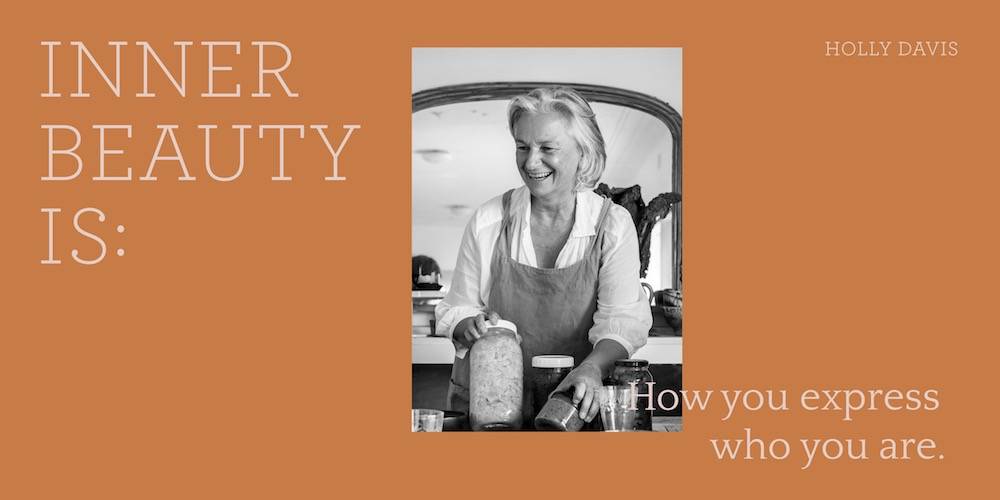 As a wholefood chef, teacher and one of the co-founders of Sydney’s famous Iku Wholefood, Holly Davis certainly knows a thing or two about fermentation and the importance of nourishing ourselves from within with nutrient-dense wholefoods.

Her blog, Food by Holly Davis, is a treasure trove of inspiration (as is her gorgeous new cookbook, Ferment) and if we’re ever in Palm Beach, we’ll certainly be popping in to one of Holly’s cooking classes…

Can you share little bit about your story and your background, launching Iku and bringing the philosophy of macrobiotics to life?

I was about 13 and suffering from a cold when my friend’s sister said, "Oh, let me make you a drink, it'll make you feel better." She made me a little umeboshi and kuzu drink with a bunch of tea which I drank and although I thought it was a bit odd, I felt a noticeable improvement later in the day.

So the next time I saw her I said, “Oh you know that drink you made me, that was really kind of weird but it did make me feel better, why? What's the story?” When you're that age, I think you’re really, really receptive and hungry for knowledge, so it sparked something in me that's never died – the concept of food as medicine.

I think she explained to me then what an umeboshi plum is. It’s actually a green apricot – so a raw, green, kind of inedible apricot that's salted and fermented with a herb, shiso, that makes it that lovely pink colour. It kind of looks like it's a plum and it's a sort of plum shape, but it's not a plum. It's been used medicinally for centuries and the idea is that it's alkalising, that it helps to alkalise the system and that it's great for the digestive system.

When did you set up Iku?

The friend was Willem, who I set up Iku with. We were introduced and then we didn’t move for the entire evening. We just sort of cemented, it just felt important. I don't really know how to describe it, it was like we both felt we'd met for some purpose. And then we became friends. That was February and by September, we'd set up Iku.

I had the food knowledge and skill and he had all the enthusiasm in the world and a sense of business that I didn’t really have.

Almost everything. I think it's its aliveness that is compelling. As humans, we think we're governing the world when in reality, bacteria have it over us. They are, literally all over us. I think it's symbiotic. You know, a sourdough starter is a great sort of thing to look at because there are bacteria in a sourdough starter that don't exist anywhere else – no one has found them anywhere else on the planet. So you kind of wonder who's working for you. We think that we're utilising a sourdough starter, but what we're actually doing is creating an environment that is friendly for particular organisms that can only live like that – and they've had us doing it on a daily basis for 6000 years.

What does inner beauty mean to you?

It's how you express who you are, I think. I was thinking about expression in terms of the way you look, or you know, how we look. Like, I’ve gone grey and I thought… you know, I let myself go grey.

Can you give us an example of when you listened to your gut instinct?

I rely on my gut instinct at every meal and pretty much all the time. Most things I do, I do according to a feeling! I have turned up uninvited because I had a sense it was the best move. This includes travelling to visit someone two days away – happily I was not turned away!

What do you do to get your daily GLOW on?

I wash my face with water alone, brush my teeth with Weleda salt toothpaste and if it’s a special occasion, fill in my eyebrows. I also eat biodynamic and organic wholefoods with a little cultured drink or condiment.

I’m one of those people who... love life, needs friendship in some form daily, appreciates nature and gives massive thanks for having found Palm Beach to call my home.

Sometimes when I wake up… I sort of always do the same thing – I wake up, put the kettle on and drink tea – otherwise the day has not quite begun. I like a mix of Keemun 49%, Yunnan 49% and Russian Caravan 2% leaf teas.

What does inner beauty mean to you? Join the conversation by heading to @TheBeautyChef

Visit The Digest for more beauty and wellbeing inspiration.

Join our inner beauty family & receive 10% off
your first order 5 Essential Self-Care Habits, Just in Time for the Festive Season

Simple ways to nourish your gut for better brain health Is inflammation making you age faster?

back to top
Added to Cart
Refer friends, get $10 off